This was done with the purpose of increasing the number of these specimens in the Maya Biosphere Reserve and, therefore, contributing to the strengthening of the wild population of scarlet macaws. After their release it is estimated that there are about 300 macaws in the reserve.

“Macaws are increasingly threatened by poaching for the illegal wildlife trade, in addition to habitat loss, driven largely by intentional forest fires, livestock and the expansion of human settlements,” WCS reported.

“At AgroAmerica, we are fully committed to supporting activities to protect and maintain riparian zones in the areas in where we conduct agricultural operations, and in areas of biological importance for the country,” Fernando Bolaños, CEO of AgroAmérica, said.

To fulfill this commitment, the agro-industrial food company, AgroAmérica, signed an agreement with WCS and Fundación Solidaridad to strengthen the Guatemalan System of Protected Areas (SIGAP, by its Spanish acronym) through the implementation of pilot projects to restore and maintain the landscape, according to the strategies of CONAP and the Ministry of Environment and Natural Resources (MARN by its Spanish acronym).

The agreement seeks to support the conservation of 19,000 hectares of forest at Laguna del Tigre National Park. This is to help protect and monitor endangered species and their habitats, including animals such as scarlet macaws, jaguars, white-lipped peccaries, tapirs and white turtles. This will assist us in maintaining natural ecosystems (forests, wetlands and savannas) protected from threats like fires, invasions and other illegal activities in the ecosystems of the project area.

AgroAmérica also joined the environmental conservation project of the Foundation of Cultural and Natural Maya Patrimony (PACUNAM, by its Spanish acronym) to contribute to the protection of the cultural and natural heritage, such as the tropical forest and the flora and fauna of the Maya Biosphere Reserve in Guatemala.

“At AgroAmerica we implement a Zero Deforestation policy, we share good practices and field experiences related to the RSPO standard; we actively participate in technical roundtables that seek to manage and develop sustainable landscapes and we support specific reforestation and conservation projects,” Bolaños stated.

The freeing of macaws is one of the many projects promoted by AgroAmérica.

“Ozone for Life” is this year’s motto to remind all citizens and sectors of their responsibility to take care of this fragile gas band that protects the Earth from the harmful effects of the sun’s rays, thereby contributing to the preservation of life on the planet.

According to the international organization WWF, in its article “Planting on degraded lands”, the oil palm has the capacity to absorb 15 metric tons of carbon dioxide CO2 per hectare. This means that it is carbon neutral, since the amount of tons of carbon dioxide that the palm fixes is greater than the total emissions generated by agricultural and industrial activities. In Guatemala, greenhouse gas emissions from the production of palm oil represents only 0.45% of the nation’s total emissions. 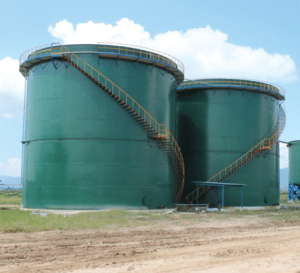 Guatemala, April 2013. Agroamerica along with the Ministry of Environment and Natural Resources and the Independent Association of Banana Producers -APIB- (for its initials in Spanish) is implementing a recycling project to maintain “Clean Beaches” in six communities in Tiquisate, Escuintla.

The project began with Agroamerica’s donation of 115 trash cans and the coordination of the six communities Municipal Sustainable Rural Development Councils (COCODES) and community leaders to participate and to give follow up in the project.

Upon completion of this project is expected to revive the economy of the communities involved, to teach and promote good hygiene practices as well as to learn how to protect the environment, eager to achieve a healthy living style and to serve as an example to be followed by other communities.

Ernesto Telon, president of the Municipal Sustainable Rural Development Council (COCODE) of San Francisco Madre Vieja in Tiquisate, Escuintla stated: “This project, will be in benefit of my community, now that the rainy season is approaching it will help to reduce environmental pollution and to prevent diseases in children and adults.”

Guatemala, February 13, 2013. Personnel from the environmental department of Cementos Progreso -CEMPRO- visited the water reservoir of Agroamerica in order to implement it in their operation. Through this reservoir, water is saved during the rainy season, to be used during the dry season (summer).

Agroamerica has the expertise and capability for technological research to continuously improve the production system by minimizing the use of resources and care appropriately the environment.

Cristian Mora, Production Manager, stated: “For Agroamerica is very important the relation with other companies, for that reason Agroamerica shared its good environmental practices with CEMPRO.”

Oscar Perez, CEMPRO Environmental Manager, was very thankful with Agroamerica’s team: “The visit succeeded our expectations. The reservoir project is worth to be duplicated. Thank you for bringing forward this project, sharing the information and for the hospitality received during our visit.”

Marvin Lopez, Agroamerica Quality Control Manager, commented that for the company is of great pride and satisfaction that a company such as Cementos Progreso duplicates a large scale project such as Agroamerica’s water reservoir model. “This type of visits is important because they strengthen institutional alliances that allow knowledge exchange about projects that are being implemented successfully. CEMPRO personnel was satisfied with the knowledge acquired and invited us to visit them.”

AgroAmerica Trains Central Office Personnel To Respond And Evacuate In Case Of Earthquake Or Fire.

Guatemala, November 2012. Last Friday, in the central office of Agroamérica, a course on how to respond and evacuate in case of earthquake or fires was given to a group of employees that will work as leaders in charge of training the rest of their colleagues and guide them in case of emergencies.

The workshop was given by the director of the Technical Training School of the Municipal Firefighters with the support of Seguros Validat, with the aim of training the staff to act correctly, prevent injuries during earthquakes or fires, and to know how to react and evacuate the building.

The next step is for the leaders of each level to train the rest of their colleagues, according to what they learned in the course.

Some of the recommendations that must be followed in case of an earthquake or fire are the following: